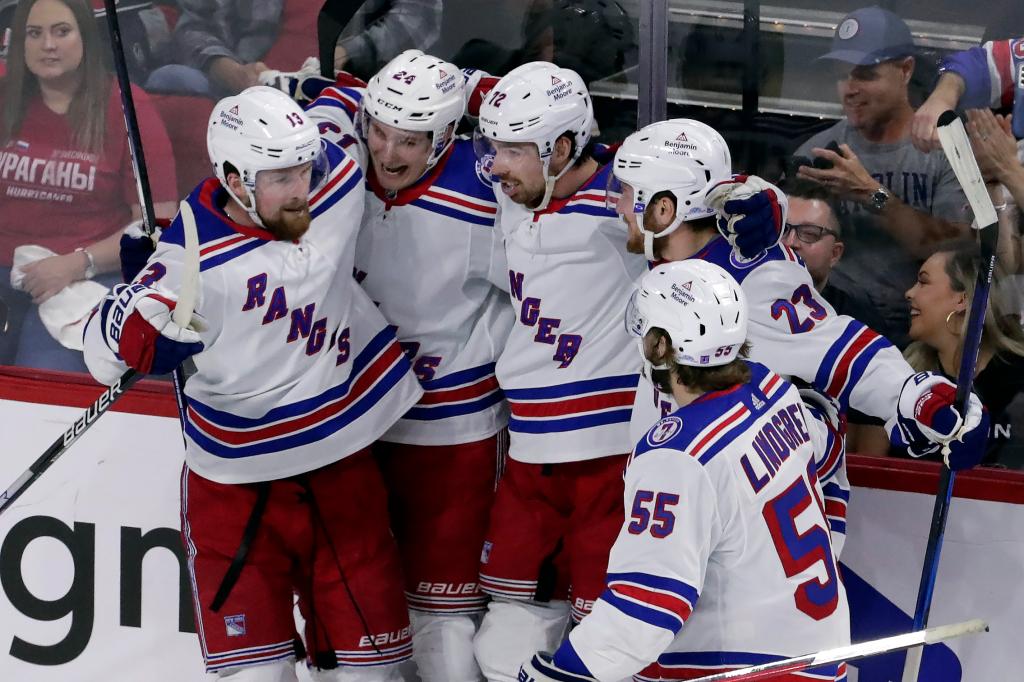 The line combinations were not the root cause of the Rangers’ travails Thursday in their 3-1 Game 5 loss to the Hurricanes in Raleigh, NC, which was not nearly as close on the ice as it was on the scoreboard. But with head coach Gerard Gallant saying that he thought his team looked tired throughout … Read more

RALEIGH, NC – The Rangers are headed back home in do-or-die mode once again. After losing 3-1 to the Hurricanes in Game 5 Thursday night at PNC Arena, the Rangers will need to stave off elimination for a fourth time this postseason at Madison Square Garden on Saturday and then be the first team in … Read more

RALEIGH, NC – Remember all that talk about how the Rangers needed grit? It was less than a year ago, so it still seems like a fresh narrative. At the end of last season, the way the Rangers lost five of their last six games – which included three shutouts – against physical teams like … Read more

RALEIGH, NC – Game 6 in Pittsburgh, Rangers down 3-2 in the series and 2-0 in the match early in the second period. Ryan Lindgren slashes Evan Rodrigues. There is no call on the play. Rodrigues responds by roughing No. 55. He’s called for the retaliatory penalty. Five seconds later, Mika Zibanejad wires one home … Read more

Gerard Gallant has not altered his top-three line combinations often during the playoffs, but the Rangers coach broke up the Kid Line for their Game 4 win over the Hurricanes, which tied their second-round series. Gallant bumped up winger Tyler Motte as the right wing alongside Filip Chytil and Alexis Lafreniere, while dropping Kaapo Kakko … Read more

Hurricanes coach Rod Brind’Amour said he’s happy with how his team played in two straight losses to the Rangers at Madison Square Garden. But as the second-round series shifts back to Raleigh, NC, for Game 5 on Thursday night, he is looking at one area for his team to improve. “We want to score on … Read more

RALEIGH, NC – Regarding the Rangers, who have allowed six goals overall and four at five-on-five to the Hurricanes entering the fulcrum Game 5 on Thursday. 1. In a lot of ways, Sebastian Aho is Carolina’s equivalent to Mika Zibanejad, an upper-echelon, first-line center who sometimes is an afterthought when the conversation turns to the … Read more

In theory, this really shouldn’t matter as much as it matters. A Yankees-Mets trade? A Giants-Jets deal? A Rangers-Islanders swap? A Knicks-Nets exchange? At the end of the day – in theory – they’re all just opponents. Same as Mets-Dodgers, same as Giants-Cowboys, same as Rangers-Canucks, same as Knicks-Bulls. But in practice, of course… “When … Read more

A distinct home-ice advantage often is a misnomer in the Stanley Cup playoffs, as a red-hot goaltender or impactful special teams often can negate any hometown edge. Having evened their best-of-seven series against the Hurricanes with two straight wins at the Garden, the Rangers must win one of two potential games on the road in … Read more

We’re past the halfway point of each second-round series in the 2022 Stanley Cup playoffs, and one conference semifinalist has already begun its offseason, as the Presidents ’Trophy-winning Florida Panthers were swept by the Tampa Bay Lightning. What have the first four games of each series taught us? And how will those lessons impact the … Read more