It was the kind of goal he makes a habit of scoring, drifting into space unchecked and then finishing clinically. For Tottenham Under-23s last season, he scored nine goals in 17 Premier League 2 games (as well as making three assists) from midfield, and he doesn’t turn 18 until August. All 10 of the players who scored more in Premier League 2 last season were older than him. Devine also scored two in three FA Youth Cup matches.

For those less familiar with Devine, you might remember him from Spurs’ FA Cup tie at Marine in January 2021 when, in the space of fewer than 15 minutes, he became Tottenham’s youngest-ever player and then goalscorer, aged 16 years and 163 days .

Moments like these are part of the reason Spurs hope to extend Devine’s contract and will work to ensure he gets the most suitable possible loan next season (more on all that later).

That goal against Marine, like the one against Austria, came after Devine, who operates mainly as a No 8, No 10 or inside forward, drifted to the left and then moved infield. On Sunday, he was playing nominally on the right of a front three in a 3-4-3, just behind his Spurs’ team-mate Dane Scarlett (another youngster creating huge excitement at the club).

In the build-up to the goal against Austria, Devine moves all the way out to the left wing and follows his pass to Carney Chukwuemeka. 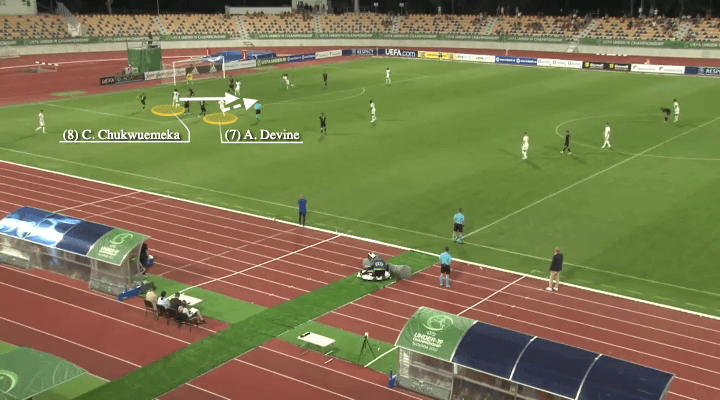 He moves towards the edge of the box as Chukwuemeka takes on a couple of defenders. 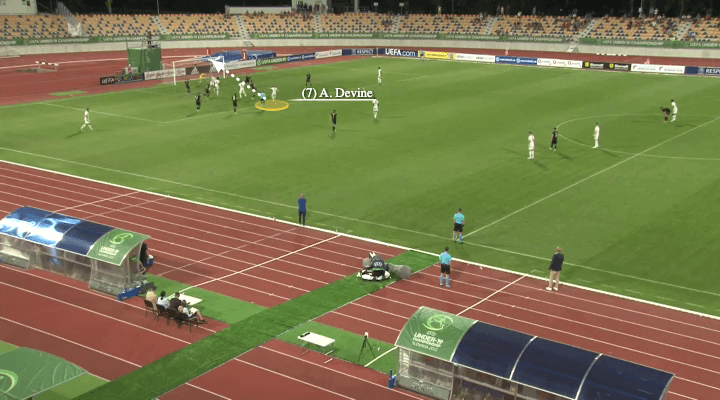 No one has tracked his run and Devine smashes his shot into the top corner.

For his first England Under-19s goal – against Armenia in March – Devine made a run from the right-hand side. 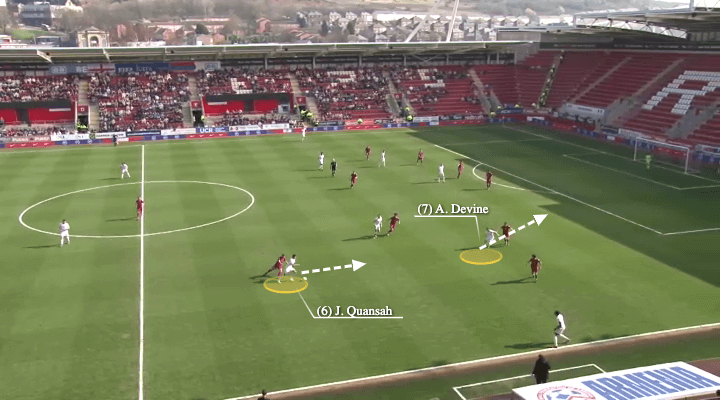 First, he checks as if to go short and then spins in behind. 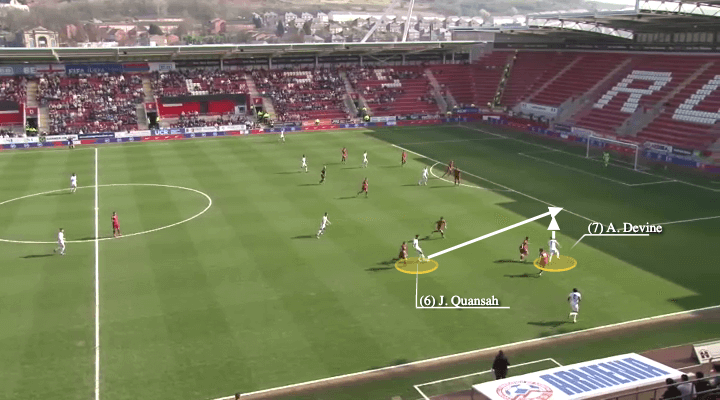 Again, no one has tracked his run… 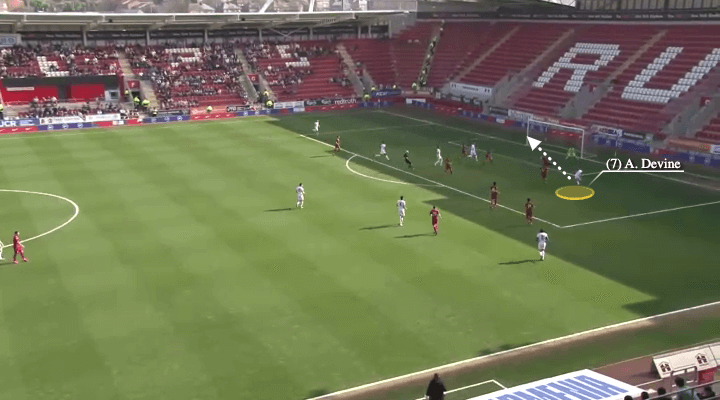 … And again, he finishes clinically, this time into the bottom corner.

Devine, who is from Warrington in the north west of England and was released by Liverpool at the age of 11, grew up playing as a striker and has that knack for knowing where the ball will drop in the box. That said, an attacking midfielder who gets on the end of things like Tim Cahill might be a better comparison, to continue the Merseyside theme.

“He’s basically a midfield player, but with an instinct to appear in finishing zones and to score goals,” his then-manager Jose Mourinho said after that history-making goal against Marine. “He’s a kid with good potential.” A few weeks later Mourinho selected Devine in his squad for the Premier League trip to Brighton & Hove Albion.

Sunday night’s game also showcased some of Devine’s other qualities. The swagger that saw him embarrass an opposition player with a cheeky piece of skill and get the crowd off their feet, the defiance to take on opponents who were all older than him (most of Austria’s team were 19, Devine is only 17) and the sense with some of his touches that, for all the coaching he’s had, the spontaneity of his game is still there. Devine may look cherubic with his ruddy cheeks and wavy hair (now tightly cropped) but he has an edge and a single-mindedness to him.

Manager Ian Foster was delighted with his performance and gave him a big hug after the match. During the game, he issued Devine instructions for him to pass on to his team-mates.

The focus now shifts to England’s next match, against Serbia this evening. Serbia are a physically imposing, experienced side, but the sense is that Devine will relish taking on that kind of opposition. He often saves his best performances for the biggest games – scoring twice for Spurs’ under-23s against Arsenal last season, and producing a sparkling display against Chelsea for the under-18s last February. Then there was that first-team debut against Marine.

“He’s a very good player, a never-say-die player,” says one coach with a lot of experience in youth development who has seen Devine up close. “His team will be losing 4-0 and he’ll still be working his balls off. He’s going to be a good player, Alfie. A lot going for him and a good attitude. ”

🏆 Alfie Devine has been nominated for September’s Premier League 2 Player of the Month award.

“I remember the first time I saw him, I just thought he had a bit of everything. He could handle the ball, hold off defenders, he had that determination, ”Peter Reid, the former England midfielder and ex-Sunderland and Leeds United manager who was technical director at Wigan Athletic while Devine was at the club, told The Athletic last year. “He’s always had that technical ability and has a great chance of reaching the top.”

Once the Under-19 European Championship is over, Devine’s focus will turn to next season. The plan is for him to be loaned out for the coming campaign, with teams in the Championship, League One and the Scottish Premiership interested. Spurs resisted approaches from teams such as Leyton Orient to take him on loan for the season just gone, but it’s clear he’s outgrown youth football and needs to test himself against experienced professionals. Spurs had considered keeping Devine at the club for another season so that he would have completed three full seasons and could then be registered as a club-trained player. The fact Devine had joined from Wigan Athletic in 2020 meant he couldn’t be registered on Spurs’ B list for European competition last season and explains why we didn’t see him in Europa Conference League squads.

But his development has been such that a loan is seen as the best course of action – Devine himself is keen for regular men’s football – and his reputation is growing all the time. He’s caught the eye of some of Europe’s top clubs as well.

Spurs will give careful consideration to where to loan Devine, hopeful of recreating the successes of Oliver Skipp at Norwich in the 2020-21 campaign, and Troy Parrott at MK Dons in the season just gone.

The club will also hope to extend Devine’s contract at Spurs, signed on his 17th birthday last August, which expires in 2024. Once Devine’s back from the Euros – possibly just in time for Tottenham’s trip to Korea, depending on how far England go – he and the club are expected to start discussing a new deal.

Antonio Conte is a big fan of Devine, which is why he was so involved with the first team towards the end of last season – both in training and being on the bench for matches like May’s north London derby. It wasn’t just about filling gaps – Conte and his staff really see something in the youngster. The head coach wants players developed in the under-21 set-up and given to him ready to go. He sees Devine in that category, and has been impressed with how he seamlessly he’s fitted into the first-team group, in terms of ability and attitude. 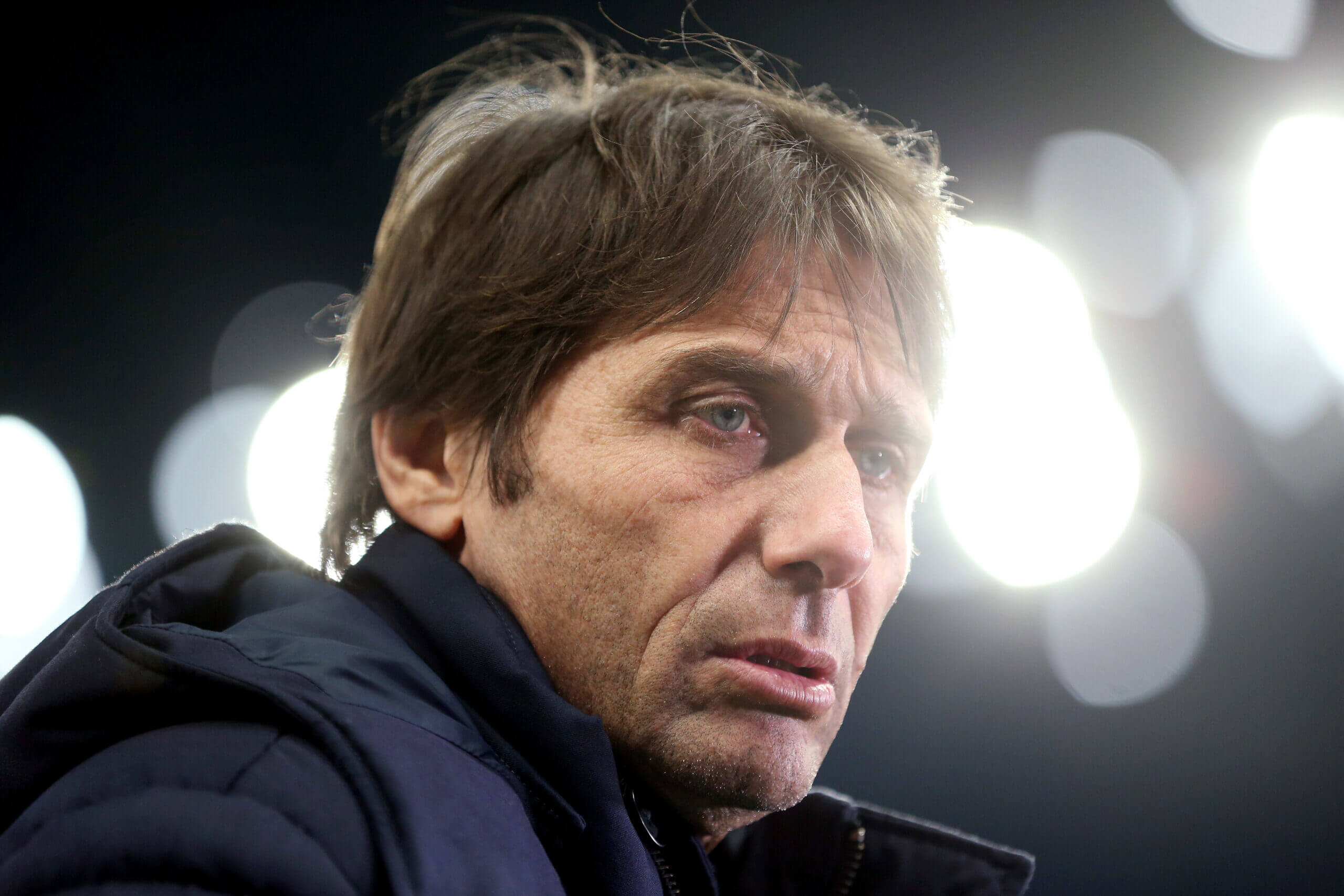 Conte’s staff have been similarly impressed, some particularly taken with his dribbling and confidence with the ball at his feet. At youth-team level, Devine has shown again and again he has the character to dominate games and lift his team-mates with his attitude and communication on the pitch. These are traits he shares with his father, Sean, who played professional rugby league as a scrum-half for St Helens. During the under-23s’ north London derby against Arsenal in March, for instance, Devine took matters into his own hands with the team 2-0 down and scored a brilliant solo goal as part of an outstanding display, despite the 2-1 defeat .

Later that month, Devine scored his first goal for England Under-19s with that well-taken effort against Armenia. He then won the penalty from which Scarlett scored against Portugal three days later.

Continuing his development, Devine took his chance to shine when Spurs’ under-23s played Brighton at the Tottenham Hotspur Stadium on the Bank Holiday Monday in May. The game ended goalless but Devine almost scored and could be heard constantly organizing and encouraging his team-mates. He seemed to pop up everywhere, and looked a cut above with his technique and athleticism.

On that theme, one coach tells a story of watching Devine in a game at youth level and, as part of his report, was tasked with finding three weaknesses. He said he genuinely couldn’t.

Not that last season, 2021-22, was all plain sailing. Devine suffered a few injuries and was unavailable for many more games than he would have liked. But he finished the campaign strongly and has carried that form on with England’s under-19s.

He’ll hope for more of the same tonight – and into next season and beyond.