If we’re talking about the Penguins acquiring a top six center or a top pairing defenseman via trade it isn’t a reasonable or likely thing to happen. They have the 29th ranked farm system and not a lot out talent they can spare to move. They aren’t in a great spot. If you are talking about acquiring depth players via trade. It is certainly on the table. One way to make out well in a trade is to target a team who is undervaluing their underlying numbers because the goals and assists didn’t match.

I think there’s an opportunity for the Penguins to target both a team and a player to make an improvement on the right side while also finding a team who will overvalue what the Penguins have to offer, mid-tier defensemen.

The Edmonton Oilers aren’t a team known for their ability to fill out the roster surrounding Connor McDavid and Leon Draisaitl. Their playoff run was solely on the backs of those two superstars. They recently tried to get the last bit of hockey out of Duncan Keith. They also have a winger named Jesse Puljujarvi who they have soured on. He had 14 goals and 36 points in 65 games. His defensive metrics are upper end. He’s a really good depth player who has had finishing problems. Sounds a lot like some guy named Valeri Nichushkin before his change of scenery. In fact, Puljujarvi has better numbers than Nichushkin did at similar ages 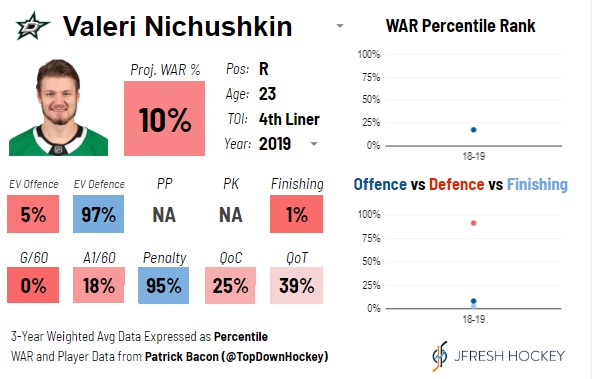 Nichushkin has been a breakout star for the Avalanche. He is going to get a boatload of money on his next contract due to his play in Colorado. The cost to acquire was minimal and the reward is a likely Stanley Cup. Even if Puljujarvi doesn’t hit the highs Nichushkin has this season the underlying numbers still provide you a very responsible player with more upside on what should be a very reasonable cap hit. Puljujarvi is a pending RFA coming off of a 1.2M cap hit.

I don’t respect the Edmonton front office. I think the game has long passed Ken Holland by. They’ve done a miserable job helping out McDavid and Draisaitl over the years. I think they are definitely susceptible to moving on from Puljujarvi without getting proper value in return. I think it would be wise for the Penguins to start throwing names like Brian Dumoulin and Marcus Pettersson at them. Dumoulin has a modified no trade clause heading into the final year of his deal. It is a ten-team list. I’m willing to bet Edmonton is on that list. If my memory serves correct Florida was on Patric Hornqvist’s no trade list and yet…

“This came up and blindsided me because I had a no-move clause,” Hornqvist said Friday, according to the Pittsburgh Post-Gazette’s Matt Wensel. “But then I find out that Pittsburgh didn’t want me and Florida really wants me, and it was an easy choice for me and my family. I’m super excited to go down there and help them win some games.”

Dumoulin is the kind of player Edmonton and their media would lap up. Multiple time Stanley Cup champion playing on the top pairing. They didn’t care about the warning signs with Duncan Keith. Not sure why they’d care about them with Brian Dumoulin. If you told them they had a pick of Pettersson or Dumoulin I bet they’d take Dumoulin.

Puljujarvi is the tier of the player the Penguins have the assets to trade for. You are buying lower than you normally would from a team who doesn’t really know what they have. Those are ideal trading parameters. For a team like the Penguins with few solid options this seems like a no brainer to entertain even without knowing the fates of Evgeni Malkin and Kris Letang.