It was nearly six years ago that the Maple Leafs, to celebrate their Centennial anniversary, named the 100 greatest players in franchise history.

One game into his NHL career at that point, with the first four-goal debut in league history, Auston Matthews did not make the list.

Six seasons later and Matthews should top it. Though he’s only 24, he’s already the greatest player the franchise has ever seen, reaching heights – including the first Hart Trophy win by a Leaf in the modern era – never before seen in Toronto.

Matthews is the GLOAT – the greatest Leaf of all time.

His case is pretty convincing already.

Matthews’ list of individual accomplishments is mountainous, and without comparison to any Leaf player, ever. It’s one of the best starts to a career by any player in NHL history, period.

The Leafs hasn’t had a best-player-in-hockey contender in a long, long time. Nor have their players won many individual awards. Before Matthews won the Calder Trophy in 2017, the last Leaf player to win a major award was Doug Gilmour, with the Selke Trophy, in 1993.

Matthews is only the third Leaf ever to win the Hart, joining Kennedy and Babe Pratt in 1944. No Leaf has ever won the Norris Trophy as the league’s top defenseman. It’s been decades since a Leafs goalie captured the Vezina.

Matthews’ four-goal debut was just the opening bar in a 40-goal rookie season, the most ever by a first-year Leaf. That earned Matthews the first Calder win by a Leaf in 51 years. He’s tacked on three more seasons of 40 goals or more, giving him four now in his career – already on par with Darryl Sittler for the most in franchise history.

Were it not for injuries and a pandemic-shortened 2019-20 season, Matthews might already have six 40-goal seasons to his name.

Last season, Matthews smashed Rick Vaive’s franchise record for the most goals (54) in a single season by a Leaf, becoming the first NHL player in a decade to pot 60. Matthews needed only 73 games to get there.

After a sluggish October, when he was still recovering from offseason wrist surgery, Matthews buried an astounding 57 goals in his next 61 games. That included a Mario Lemieux-like run of 51 goals in 50 games.

Matthews finished the 2021-22 season with 106 points, the fourth-most in a single season by a Leaf.

He’s posted the three best adjusted-goal-scoring seasons by a Leaf in modern history.

No. 3 Leon Draisaitl has 26 fewer goals despite suiting up in 42 more games.

Matthews has captured back-to-back Rocket Richard trophies as the league’s top goalscorer, the first Leaf ever to do so.

It had been 74 years since a Leaf led the league in goals before Matthews did it for the first time in 2020.

As it is, Matthews has already registered 259 goals in his career, one shy of Wendel Clark for the eighth-most in franchise history.

Matthews won’t turn 25 until September. By the end of next season, he should have a spot in the top five.

He’ll inevitably overtake Mats Sundin for the top spot on that list (he’s only 161 goals away currently) if he sticks with the franchise long-term. He’s got a very good chance of eventually passing Sundin as the franchise’s all-time leading points scorer, too.

Matthews is over 500 points shy at the moment. He’s averaging 1.12 points per game so far in his career though – trailing only Doug Gilmour among Leafs in modern times. Keep that up and by his early 30s, Matthews will have the points record too.

Matthews’ first six seasons aren’t just unequalled by a Leaf, but just about any player period.

The only players in modern times with more adjusted goals in their career during that same stretch are Wayne Gretzky, Ovechkin, and Mike Bossy.

Of course, Matthews hasn’t just been an offensive force. He’s a powerhouse defensively. The ice tilts greatly in the Leafs’ direction when he’s out there. Their 5-on-5 goal differential when he’s been on the ice so far: plus-104.

Last season, the Leafs won 65 percent of the expected goals when he was out there, a mark that trailed only the Bruins ’dynamite pairing of Patrice Bergeron and Brad Marchand among NHL forwards. 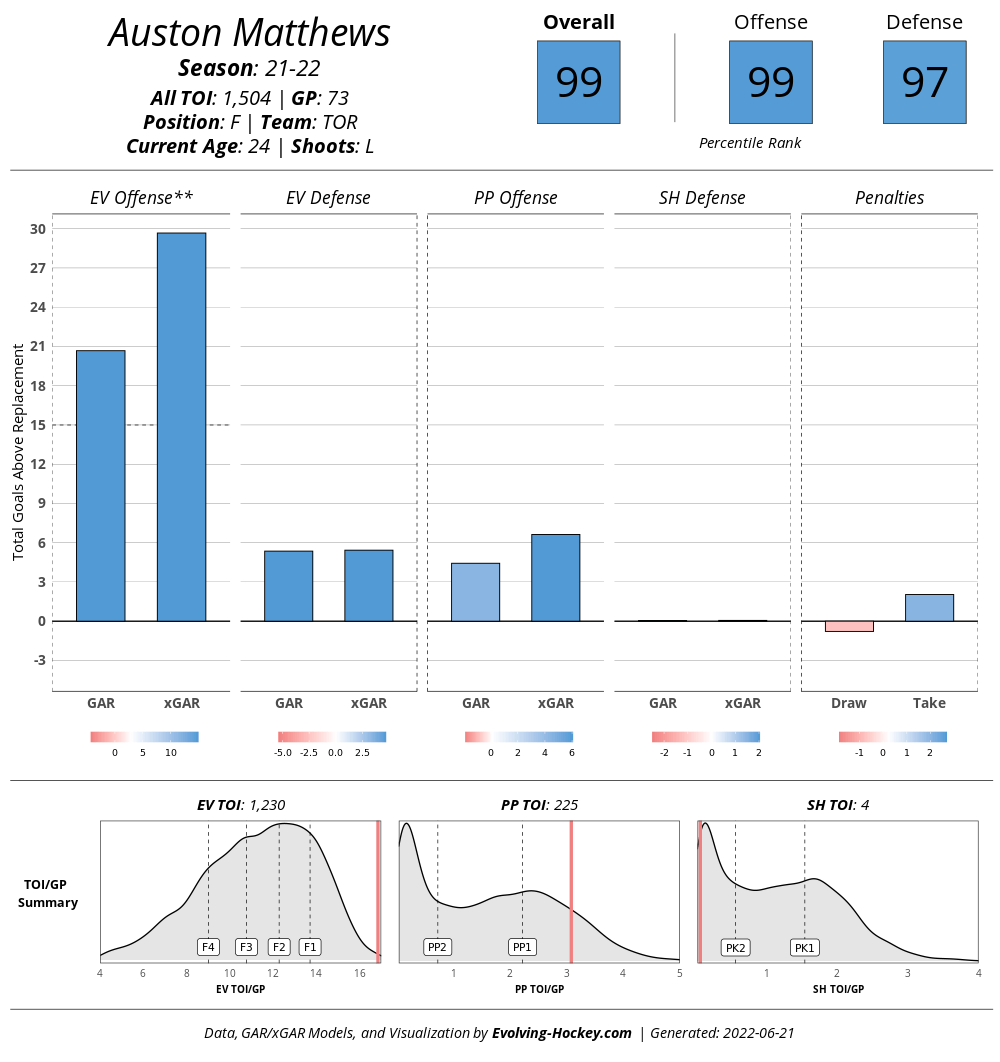 Matthews’ statistical case as the GLOAT is pretty overwhelming. He’s got the peaks and will eventually have the totals, too. The only feat he lacks to this point is team success in the postseason. That’s the only marker favoring the top contenders in that 2017 ranking.

It’s difficult to compare eras though in the team department.

Syl Apps, ranked No. 2, won his three Cups in the 40s when the league was just as small. Same deal with Kennedy (No. 3), who was among the league’s top players in the 40s and 50s – again, when there were only six teams.

Sittler (No. 4) and Sundin (No. 5) never scaled those heights among their peers.

Sittler never finished higher than third for MVP. Sundin’s best finish was eighth during a 41-goal, 80-point 2001-02 season that would rank as humdrum for Matthews.

Matthews has also done his job for the most part in the postseason: He’s scored 17 goals and posted 33 points in 39 career playoff games, including 12 and 26 in the last 26 games and four goals and nine points in the Leafs ’seven-game. first-round loss to Tampa this spring.

He was the Leafs ’best player during the two strongest regular seasons in franchise history – a team-record 115 points last season and runner-up 105 points during the 2017-18 campaign.

What comes next will only bolster Matthews’ case as the greatest Leaf. He’ll inevitably be the favorite to win a third straight Rocket next season, and a co-favorite, in all likelihood, for MVP. More awards (maybe even a Selke) are likelier than not.

More goals. More points. Those are sure things. Carry the Leafs to a Stanley Cup one day and there will be no argument – if there is one even now.